For the past few days, my Facebook newsfeed has been flooded with shares of a post from Daum about the bill that Representative Jasmin Lee has (allegedly) proposed which seeks to give unregistered foreign children the right to a public education and government health services, and also exempts them from compulsory deportation and guarantees their right to live with their family in Korea. The post spawned negative reactions (and a few derogatory comments ) from Korean netizens, but what they fail to realize is that this bill was not actually proposed by the Filipina representative whom they are bashing. The bill was proposed by a group of Korean congressmen led by Representative 정청래.

What makes this bill controversial?

Although the bill is focused primarily on the rights of undocumented children, some netizens worry that it might worsen illegal immigration in South Korea, and even encourage it. Some commenters lament the bill’s possible impact on the economy if it gets approved:  If the children of undocumented immigrants are allowed to stay in Korea, the parents get to stay, too. They take away the jobs that should be given to Koreans and legal immigrants. They don’t pay their share in taxes, but they are entitled to free social services, and their children are given free education and healthcare benefits, which makes it unfair to tax-payers. The bill, however, does not only apply to undocumented children of illegal immigrants but to “all” undocumented children in South Korea, including those who have been abandoned by their parents and children who were born outside Korea whose documents have expired. It seems that there are also many Filipinos who are less enthusiastic about the bill, and sadly, they have no qualms about hurling stones at a fellow Filipino without really knowing what’s going on. One Facebook group of Pinay spouses was bombarded by negative comments when a member posted something about the proposed bill: 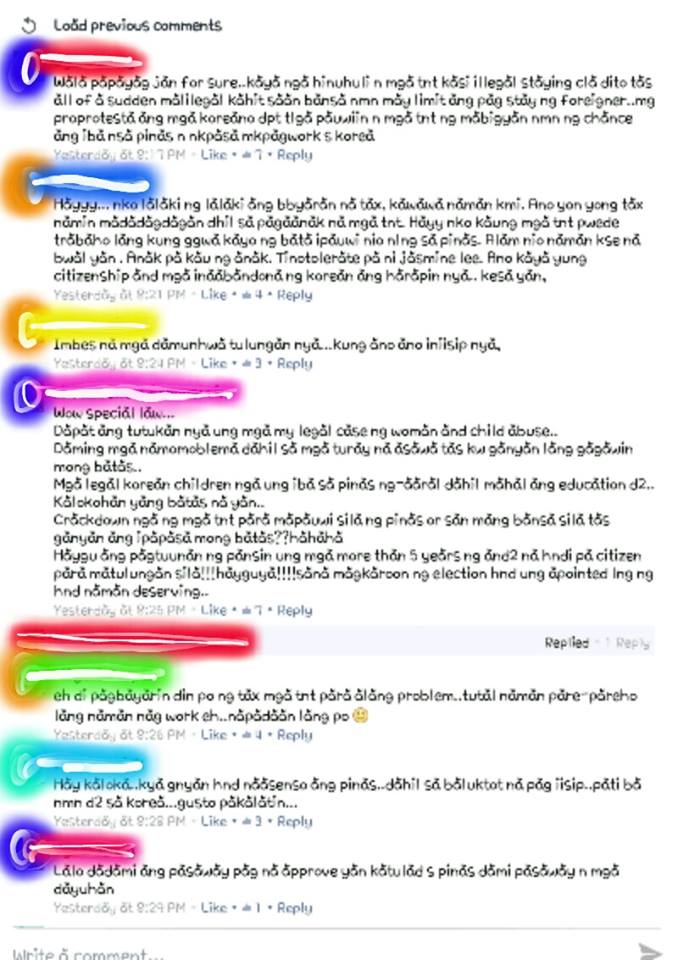 Most of the commenters are criticizing Representative Lee for prioritizing illegal aliens instead of foreign spouses and their children who need more government support and protection. On the other hand, there are commenters who voiced out their opinions regarding the proposed bill instead of taking out their anger on Representative Lee. A commenter suggested that more attention be given to abused women and children who have legal rights to stay in Korea, but are living in misery. She added that some families send their kids to school in other countries because Korean education is expensive, so providing free education for children of illegal immigrants who do not pay proper taxes at all is absurd. The truth is, both documented and undocumented children in South Korea are entitled to free public education until secondary school, only that education benefits of undocumented children are “limited” as described in an article from The Korea Times:

Under the current Education Law, children of registered citizens have free access to a six-year primary school and three-year middle school education. But it limits education for children of undocumented foreigners to the first six years. Furthermore, primary education is only available on the condition that a document identifying a child’s home address is submitted to the education authorities.

The problem with the current system is that most parents (who are illegal immigrants) don’t dare to enroll their children in public schools for fear of being deported if the schools ask for the address and identity of the parents. A family counselor in Korea told me that some schools do not accept immigrant children simply because they have no registration number. Take the case of a 16-year-old child of an illegal immigrant from Nigeria who was denied admission to high school because she doesn’t have a foreign registration number. Her middle school teacher sought the help of Gong Gam Human Rights Law Foundation and the girl was admitted only when it was explained to the local office of education that a child “may receive high school education regardless of the parents’ undocumented status” as stated in the School Registration Guideline for Multicultural Students issued by the Ministry of Education. The girl was fortunate enough to have someone stand up for her, but not all of these children are lucky. There are currently no laws that protect the rights of undocumented migrant children in South Korea. A couple of commenters are protesting about having to pay more taxes to support the needs of these undocumented children. Some are saying that they have to work hard to learn Korean language and assimilate into Korean culture, and wait for years before they are given permanent residence or citizenship, but this bill makes it easier for illegal immigrants to obtain legal residence in Korea until their children finish high school. They don’t even have to earn it; they just have to have kids that will give them the ticket. Some commenters believe that this bill will not get passed because Koreans won’t allow it, but if it does, it will create a conflict between Koreans and immigrants. There are those who are saying that we cannot bend the rules. If you stay in another country illegally and have a child in that country, then you have to face the consequences and not expect the government to cut you or your child some slack. My heart goes out to all undocumented children. It is not their fault that their parents choose to live in the shadows as illegal immigrants. It is not their fault that they were abandoned by irresponsible parents. It is not their fault that their neglectful parents failed to register their birth or that their documents expired. They are victims… victims of the law… victims of their parents’ actions. This bill, however, seems impossible to uphold if it does not set boundaries. It aims to help the children, but it also has huge drawbacks. Some are protesting that this bill tolerates people to break the law. Illegal immigration is a crime, after all. To be honest, I have my doubts about this bill, too. I always complain about the taxes that my husband and I have to pay in Korea, and I worry that we would end up paying more taxes once this bill gets passed, but lately, I began reading articles on immigration, and one of the solutions on illegal immigration that makes more sense to me is this one from an article from Phil for Humanity:

I agree with this solution, but illegal immigrants should undergo the same tedious process that legal immigrants go through before they get residence or citizenship in Korea. They should be given more requirements (or maybe do community service for a number of hours) for breaking the law in the first place.
We all have things to say about this proposed bill, but we are not even sure what it includes or excludes. What we know so far is that it seeks to give undocumented children in Korea free education, health care and social support until they finish secondary school. In the news articles that I have read, there was no mention of the children’s parents or how they might benefit from this bill. In this story, the protagonists are the children. We hope that this will all be about them… for them.
As for the bashing and fault-finding, let’s give it a rest, people! JTBC’s Fact Check has already explained this issue. The author of the bill is NOT Representative Jasmine Lee. I repeat… the author of the bill is NOT Representative Jasmine Lee.

Tell me what you think... ^^ Cancel reply

안녕하세요! Take a look around and grab the RSS feed to stay updated. See you around! ^^